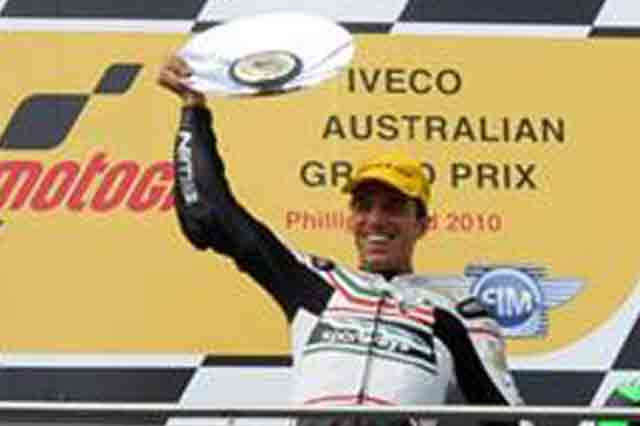 Sammarinese, he was born in Rimini February on 26th February 1984 in a family where the passion for motors and speed can be considered hereditary. His father Vinicio, indeed, was a rally cars mechanic and he passed down this passion to his sons, Alex and his older brother William.

When Alex was 7, they were gifted with a minibike with which they started racing in Miramare’s track, right behind the corner. 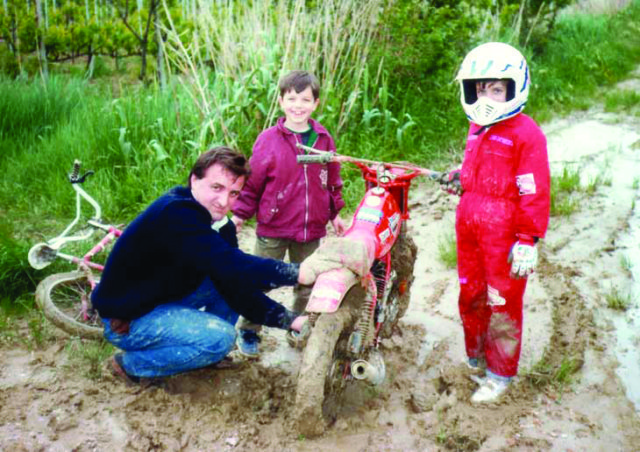 Sammarinese, he was born in Rimini February on 26th February 1984 in a family where the passion for motors and speed can be considered hereditary. His father Vinicio, indeed, was a rally cars mechanic and he passed down this passion to his sons, Alex and his older brother William.

When Alex was 7, they were gifted with a minibike with which they started racing in Miramare’s track, right behind the corner.

A life on a motorcycle

Good placements and devotion would soon reward him with the chance to race for World Championship. His debut was in Imola in 1999 where he started, as a wild card, at the last GP hosted by Autodromo Enzo e Dino Ferrari.

From here his career took an escalation. In 2000he was still in Honda with Team Matteoni, he raced for the entire World Championship 125 winning “Rookie of the Year” trophy.

He reached his first podium in 2002 in Germany. Alex was riding Aprilia in the team managed by Lucio Cecchinello. 2003 is the satisfactions year: the Sammarinese took part as one of the main protagonists in 125 class and ends his season as world vice champion. The 2nd final place and continuity in results allowed him to go to 250 class, promoting him to official Aprilia bike and ending the season at 5th place.

In 2005 he wore the colors of MS Aprilia Italia Corse ending the season in 7th place, placing two times 2nd and 3rd. The following year (2006) he was the official driver for Aprilia Racing in Team Aspar earning the podium 11 times. In this season, closed in 3rd position, he reached also the first world victory in Valencia GP. Thanks to eight podiums during the following season he earned, for the second year in a row, the final 3rd place in ranking. In 2008 another promotion brought him in MotoGP class for the first time, competing for Team Gresini. That was not his best season but Alex showed his skills finishing 4th for two times, in Italy and in Germany. His first year in MotoGP class ended with a considerable 14th place. In 2009 , again with Gresini, the long awaited first class podium arrived. On 31st august in Indianapolis, the white-blue flag waved from the second step. Riding his Honda he finished at 4th place in Australia Grand Prix and in England Grand Prix, at 5th place in Assen (NL). These placements helped him finish his second year in the Queen Class as 8th in ranking.

In 2010 Alex De Angelis had to face the new Moto2 class first with Team Scot and then, after three races in MotoGP, with Team Interwetten. He finished the season with Team Jir with whom he won the Australian GP in a spectacular end of the season.

Same team also in 2011 during which Alex proved to remain one of the main racers with the 3rd place at Sachsering and the victory in Australian GP. He earned points at every race except one, ending the season 4th in ranking.

In 2012 began the partnership with NGM Mobile Forward Racing Team for the Moto2 Championship. The mid-season bike change forced Alex to restart the learning phase but satisfactions came as well with a 3rd place at Sachsering and the victory on the Malaysian track of Sepang. Unfortunately because of the injury occurred at Phillip Island, he had to finish his season with two races left.

Same team and same championship also in 2013 with a positive experience during summer riding a Ducati in Laguna Seca GP. With Desmosedici Gp13 for Ignite Pramac Team he ended the race as 11th.

In 2014 Alex started Moto2 Championship as solo driver for Team Tasca Racing. At the half of the season, from Czech Republic GP, Alex took the chance to race once again in MotoGp. He replaced, until the end of the season, Colin Edwards on Forward Yamaha for the Team NGM Mobile Forward. For 2015 he signs a contract with Octo IodaRacing Team with which he is racing in MotoGP Championship.